Often when I interview photojournalists I don’t have the space in the commissioned work to publish all their comments. Rather than keep these interview out-takes in the e-filing cabinet, I’ve decided to post snippets that I think may be of interest to the wider photojournalism community.

As many of the readers of this blog know, the question “What is the future for photojournalism?” is at the core of my research into the industry and the theme of my recently completed Master’s Honors Thesis. I have asked many photojournalists whom I’ve interviewed over the past few years this question and here is a good place to share their thoughts.

The reduction in print media titles and the rise of online news services has presented a range of issues for the photojournalist from how to get paid for their work online, to copyright and ethical issues such as the use of Instagram and other Apps and digital manipulation. While there is still concern the e-World will erode opportunities and the citizen snapper will undermine the professional, the Internet also presents opportunities for greater immediacy in communication, a vast potential audience, and new creative options for the presentation of photography.

Here you will find random out-takes on various themes. I hope you enjoy.

Earlier this year (2013) I interviewed Benjamin Lowy, Andrew Quilty and Adam Ferguson for various articles. During the course of the interviews I brought up the use of Instagram and its role in the photojournalist’s grab bag. 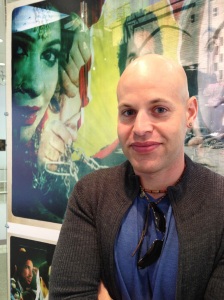 Both Lowy and Quilty had worked on the Time magazine project, along with Ed Kashi, Michael Christopher Brown and Stephen Wilkes, where the commission was to shoot the first two days of Hurricane Sandy (2012) only using their phones and Instagram. Their photos of the storm were uploaded directly to Time’s Instagram feed.

Lowy said that Time magazine’s large Instagram following is what differentiates it in the sea of citizen images that were also being uploaded to social media sites during the storm. He said large followings online are the equivalent of print media circulations; “the more people you can reach the more souls you can touch. The importance going forward is that vetted platforms with substantial reach have a great responsibility to send out important work and messages to the public”. Despite the volume of images being uploaded to the Web by the public, including a raft of fake photos, Time’s instagram feed drew tens of thousands of viewers looking for genuine content.

For Lowy social media has become “another tool that I’ve used and now that I have this huge following on social media where I feel the need to feed the beast everyday or feel guilty, it doesn’t give the catharsis I need like it used to. But social media is extremely important, there’s no other reason to use the phone. It is small and innocuous and does help you get a little more intimate with subjects as compared to having a large SLR so I do call less attention to myself, or at least I did, but now I think people pretty much know when you are taking a picture of them on the phone. But I think the primary reason to use the phone is in conjunction with posting it online, it’s editing, posting, captioning all within the framework of one piece of technology that’s very important to me, so yes social media is important.

“There’s no point to keeping all your images in the proverbial shoebox underneath your bed. Much of my career, about a decade, most of my pictures are ones and zeros, digital files that pretty much most people haven’t seen because they would appear one place, maybe in a magazine for a week or online for a few hours and that was it. So the idea is to try and occupy that digital space in a more effective way and for me right now the way technology and infrastructure is, that’s using social media”.

Quilty said he still personally wrestles with the discussion around the iPhone and Instagram compromising professionalism, but “since the Time assignment I have continued with Instagram and can see the benefit with using it in conjunction with the regular print media or online news services. For example I was in Boston after the bombings photographing for The Australian and I really felt with the time difference, almost a day from when you shoot to print, that it was a day that was being wasted in which I could have been using Instagram to keep people in the loop”.

Adam Ferguson, another Australian photojournalist, has been using Instagram with National Geographic. “What’s incredible about Instagram is the audience you can access. Traditionally as a photographer you send your pictures off to a magazine or newspaper and they publish them in print and online, but the instantaneous nature of social media is remarkable. I posted a picture yesterday (to National Geographic’s Instagram feed) and overnight 75000 people had liked it, and however many more had seen it, so it is an incredible audience to access. National Geo has more than 1.5 million followers.”

“The problem I have with Instagram is that it just becomes this mindless news feed of happy snaps also so that becomes a bit meaningless. The more I look at it the more I see it as a stream of consciousness drivel, and when there’s that much imagery lumped together it loses something – it loses its context and ability to resonate a larger narrative. Whereas when you look at a set of pictures in an exhibition, or book or tailor made iPad platform for a project I think the work resonates so much more. Instagram to me is like Twitter for photographers, it’s a bit of fun and an advertising tool.”