This week on Photojournalism Now: Friday Round Up – in celebration of International Women’s Day meet two women photographers who are doing inspirational work – Kisha Bari and Arleen Thaler.

Kisha is a Fijian-Italian who was born in Melbourne and moved to New York more than a decade ago. In recent years her focus has shifted from commercial work to social issues photography. Bari works with community organisations and advocacy groups. When I caught up with Bari in February she was finally home after months on the road – she’s also the photographer for the Women’s March.

Two of her recent projects were documenting the caravan of Central American asylum seekers travelling to the US border and following the lives of two cancer patients in the borough of Queens, where Bari resides.

In November last year, Kisha travelled to the border with activist Paola Mendoza for Families Belong Together an organisation formed in response to the Trump Administration’s Zero Tolerance policy.

“At that point the media was focused on the caravan as a whole,” says Bari. “We started telling short stories about women, families and children – there were 2300 kids on that caravan, some only a month or two old.”

“I have this photograph of this woman walking on the road breastfeeding at the same time, umbrella in one hand and baby in the other (above). When I saw her I was like wow, what is your story? You know people don’t leave their homes unless they are absolutely desperate. We need to humanise the caravan because it’s about real people.”

Bari says that at the time, “the media was focused on this mass of people…we were the first ones that started publishing on Instagram single stories about individuals… suddenly there were other media coming down to do stories and jump on that bandwagon.”

Mendoza used her significant following on Instagram to get the message out. The work the pair did directly led to donations of money, water, tents and food.

“That’s the power of social media…going down there and creating that first wave of imagery and storytelling (which was published initially on Instagram) really shaped how the rest of the conversation went…the media realised the story was deeper than 7000 people crashing through the border.” Bari also reached out to Elle (US) who published the story.

The Meaning of Now: Living Life with Cancer

When I first saw this photo essay I was immediately drawn to the spirit of these two cancer patients, Shirley and Tato, who Bari worked with for several months following them on their journey.

Shirley is a native New Yorker, and Bari describes her as “a firecracker.” Shirley had oesophagus cancer and went through more than 20 rounds of chemo. Her tumours have shrunk “to almost nothing” and she’s now out of treatment. Shirley’s story is amazing. She has eight children, 22 grandchildren and four great-grandchildren and for a time in the 1980s she was homeless with her kids. Bari tells that Shirley is a formidable figure, constantly surrounded by people and always carrying a child. In contrast Tato who is from Honduras, lives with his sister in Queens while he is receiving treatment for colon cancer. He has left behind his wife and children while he takes this journey, which at times has been incredibly lonely.

Shirley babysits up to three children, four to five days a week. Six-month-old Summer, is the daughter of an old family friend. 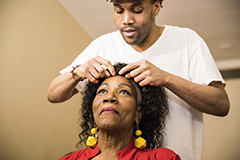 At the moment of transformation. Shirley is fitted with her new wig. (C) Kisha Bari

Bari says one of the best outcomes of the project is her connection to both Shirley and Tato, friendships that endure long after she’s filed her pictures. “It was a really beautiful story and I am still in touch with them,” she says adding that doing this story gave her perspective around how people can mentally manage the disease. “It also helped me understand why some of my friends who have had cancer or who have passed away, made some of the decisions they did.”

Tato lights a candle on a mantle amongst photographs of his sister and brother-in-law’s family.

One of Tato’s regular lunch spots on Jamaica Ave, is Pollos Doña Maria.

This project combined Bari’s images with personal stories written by Shirley and Tato. It’s been shown at Photoville, but Bari is keen to see it have an extended life. The images are incredibly emotive and tell an important story that will resonate with many. See more of Kisha Bari’s work here.

One of the perks of my work as a journalist is meeting really cool people from all around the world. Arleen Thaler is a documentary photographer based in Rochester, New York. She’s been one of my most avid blog followers and when I was in New York recently we got to meet in person and I discovered she’s doing some incredible work.

Thaler has worked with people living on the margins for many years and is now studying for her Master in addiction psychology. She has a natural empathy with people who are struggling and her compassion radiates in her photographs. Thaler was originally engaged as a documentary photographer by the centre where she now works as a counsellor and some of her clients are those she’s photographed on the streets.

“When the centre found out I had a degree in substance abuse counselling they gave me an office. So now I do photography for people who have successfully completed addiction treatment to tell their story, and I also get to be a counsellor. It’s a rare position and it’s a gift every time to be immersed in their lives, help them with their addiction and mental health and then follow up with their story,” she says.

When we catch up via Skype, Thaler is joined by her husband Daryl who is also a photographer as well as being a deputy sheriff. The pair make an amazing team and our conversation ranges widely, but what I want to share with you today is her work on the Swan Dreams Project.

Thaler is a cousin of former New York City Ballet dancer Aesha Ash, who is behind the Swan Dreams Project. Ash, who was born in Rochester, started the project to help  breakdown stereotypes, to “change the demoralized, objectified and caricatured images of African-American women by showing the world that beauty is not reserved for any particular race or socio-economic background.”

Aware of the power of imagery, Ash enlisted Thaler’s help to create the photographs for Swan Dreams. Thaler says she immediately envisaged this beautiful ballerina pictured against the decay of the city – Rochester is one of the poorest cities in the United States. Knowing Rochester’s underbelly like the back of her hand, she took Ash to the disused subway where the graffiti covered walls made for a dramatic backdrop. They also photographed in abandoned buildings including an old synagogue on Joseph Avenue, where the 1964 race riots happened, an area that is now considered one of the most dangerous parts of the city.

On the day she photographed in the old synagogue (below) there was a homicide memorial happening across the street. The Thaler’s and Ash walked out into the middle of this scene which Daryl describes as “seriously dangerous, you know there were drug dealers, gang members and all the families there…I wasn’t in uniform so they didn’t recognise me, but I saw a number of people I’ve come across!”

Thaler laughs and tells that she is often drawn towards danger, but she’s streetwise having worked on the margins where she feels the most comfortable. “I saw two little girls playing on the street and thought if the kids are there then we should be alright.” When Ash started to interact with the little girls they were transfixed, as if they were in a fairytale. They started mimicking her (below) which makes my heart melt.

“These moments can have a real impact,” says Thaler. “I felt we were bridging a gap that day.”