This is the final Photojournalism Now: Friday Round Up for 2018 – this week it’s all about women photographers. In New York the exhibition Women Street Photographers features 75 photographers including eight Australians; in Ballarat Lumina Collective, an all women group, launches Echoes exhibition; and Women Photograph reports a stellar year of activities designed to elevate women photographers and close the gender gap. 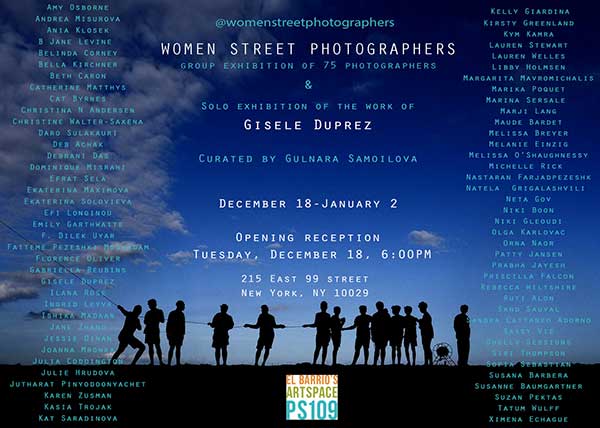 Exhibition images were selected by Samoilova and renowned documentary photographer Donna Ferrato. Submissions came in from around the globe. The common theme is “being shot candidly in public.” This international selection includes some of the most notable women photographers working in this space today.

Their new exhibition, Echoes, explores “the ways in which photographic image-making in Australia is inherently linked to questions of identity and place and to generational stories of translocation.” Themes covered include “family history, trauma and loss, migration, notions of home as well as the formulation of social and cultural Australian identities.” The work is the result of long-term studies that are informed by each artist’s unique practice.

Women Photograph is an amazing organisation that works to “elevate the voices of women and non-binary visual storytellers.” Founded by the powerhouse that is Daniella Zalcman, Women Photograph is run by a handful of women who must think sleep is over-rated (as many of us do!) as they all have day gigs too – Zalcman, Mallory Benedict, Sara Ickow, and Eslah Attar. What they’ve achieved in such a short time is incredible and shows the strength in collective action.

Highlights from 2018 (you can see the full report here)

Check out Women Photograph Year in Pictures curated by Mallory Benedict. There’s some serious talent out there!